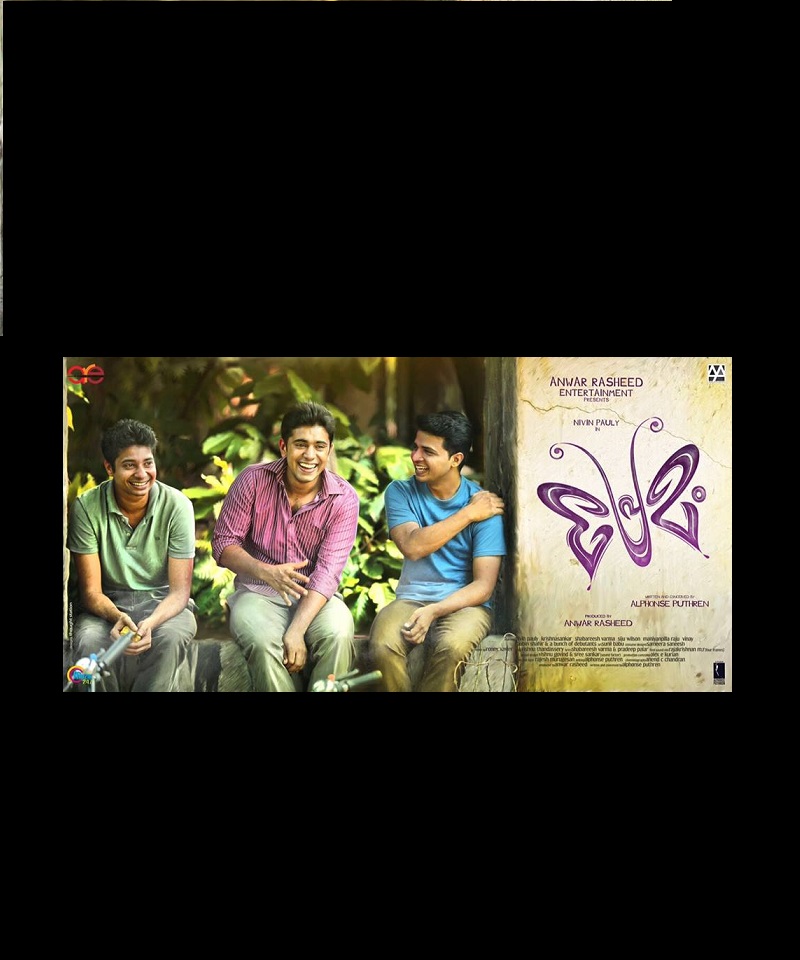 (Translation on request for S.)
A few years back, there was a picture going around on social media, of a t-shirt, I believe. It had these Malayalam words written on it (I may be paraphrasing it a little bit)  – “Aliyaa!! Avalu ninne thanneyaada nokkunne!” Roughly this translates to “Bro! She is looking at YOU, man!” I thought that was a hilarious one-liner, the ultimate bro dialogue which could put your heart in peril.  😀  It doesn’t matter who you are, your closest friends have a lot of influence during teenage and early adult years – be it getting you into trouble or getting you out of it, or just simply hanging out and riding the wave that life is.

Here, the protagonist George has three friends appearing in this song. Shambu and Koya have been best friends with him since high school, while Jojo is from George’s church and currently an employee in the boutique coffee shop/bakery he runs. In short, they are tired of George going through heartbreaks since his high school days and is trying to advise him against falling for another girl.

I have a love-hate relationship with these lyrics. As you will see, they don’t have any deep meaning; they work brilliantly in the movie though! Lot of movies have friendship songs but what makes Scene CONTRA unique is, its lyrics are not celebrating the glorious friendship, but rather dissing their bro’s effort in pursuing girls, in a conversational mode. You can feel that his friends have been there watching, sometimes being in the middle of it and taking some blow for George’s antics. So this is a bro song with a twist!

Ith vendra! love vendra!
ividallelum scene motham CONTRA!
[Dude, you don’t need this! You don’t need to be in “love”!
It is a mess even without all this!]

Loan eduthu panam irakki Audi car-um vaangi
Kootukare soap ittu bike orennam vaangi, no reply! Still, no reply!
[He took a loan to buy an Audi car (to impress her),
He buttered up his friends and borrowed a bike, still no reply! (from her)]
Avalde veetukaru oodichittu, naatukaru kallerinju, kootukaru kayyodinju, ottaykkayi
sentiments work out aayi, pennu valayilaayi, chekkan puliyumaayi
[Her family chased him off, he got stoned by the hood and his friends got their arms broken, and he became alone
That finally worked out for him (as she felt bad), he became “the tiger who got the girl”]
Total change out aayi, daily take out aayi,
pinne naalu maasam kazinjappol break up aayi!
[The whole thing changed around for him, daily he took her out,
then after four months, they broke up!]

Pattiyundu enna board sradhichilla
Athu scene aakum ennum avan chindichilla
[He failed to notice the board – ” Beware of dogs!”
So he did not anticipate the trouble it would bring]
Vecha kaalu porakottu vekkathilla!
Vecha kaalinte kettu ippozhum azhichitilla
[He is adamant that he will not retreat once he puts his foot forward!
And that foot has been dressed in bandages (from dog bite) ever since]
++Avalde chettanmaru vannu randu pottichittum,
Avante kaal randum plaster ittu ottichittum,
[Even after he got beaten by her elder brothers,
even after both his legs ended up in plaster casts,]
pennu pattichattum, keeri ottichattum,
pinne kootukaru vattam koodi puchichittum,
[even after the girl cheated on him, ripped and glued him back,
even after his friends circled him making fun,]
thora kudippichattum, neram velippichattum,
patthu paisa-de velivu polum avanu vannitilla!
[and made him drink booze until the sun came up,
he hasn’t developed 10 paise’s worth of common sense!]

*Scene CONTRA – Even I wondered what this meant when the song came out and had to do some research at the time to find out. ‘Scene aayi!’ (it is a scene!) colloquially means being in an unfavorable situation for the people concerned. CONTRA is a gun action video game which came out in the late 1980s and it was really hard to advance the levels of this game; next to impossible. So ‘Scene CONTRA’ refers to being in an unfavorable situation with no ways to get out.
++ Read together until the end of this stanza.

+ Image copyright to the original uploader.